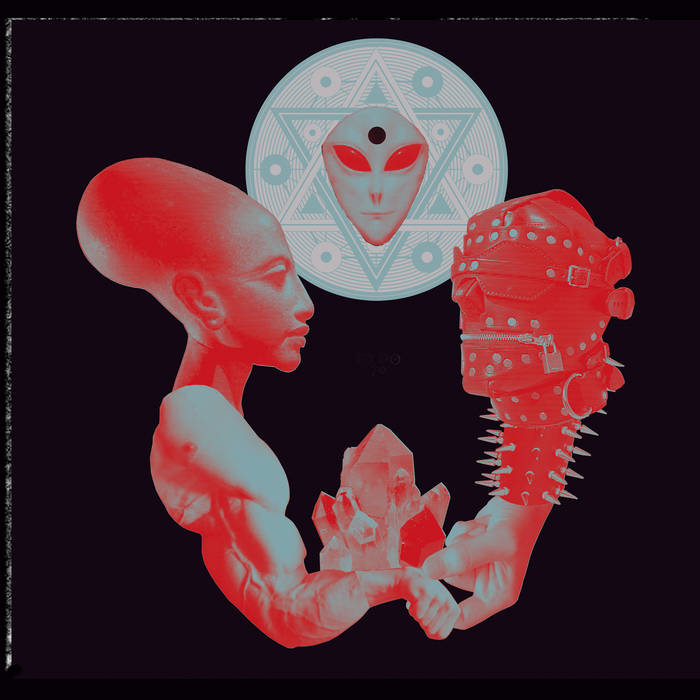 The late hour and the darkness of the room— coupled with the seductive touch of my bed's blankets— had taken its tax on my boiling mind and thus crippled was I penetrated by the Weird Woman. Very slowly and very very quietly, her solemn melodies gathered like smoke in the aether. Through dissipating lullabies, I saw that the Weird Woman, with spell and song, had cast before my bed an ineffable tableaux:

A grease-slathered BDSM body builder first held my gaze. Bulging muscles filigreed with ropey vein and glistening under complex leather bindery, this man(?) seemed a paradox. The rich matte-black of his vesture itself festooned with all manner of spike and stud and buckle which glinted silver-blue in the moonlit pallor of the room. His body was a hypertrophic caricature of my own, with bulbous knob of muscle affixed atop yet more muscle, his dark drumhead-taut skin barely containing heaving fibers that threatened to spring right off bone. He(?) was a living sculpture; a morphology that might as well have screamed STRENGTH, POWER, and DISCIPLINE. All this packed beneath elaborate leather paraphernalia that, through the diaphanous smoke of song, I knew to be designed for rituals of sadomasochism. In this detail his affect was complicated to a great degree. Why invest so much vigor to attain an indomitable muscular strength if one’s greatest pleasures lie in giving that strength away? Why re-make the body into a living monument to power only to be bound and vulnerable in the boudoir? What does it mean to build the body, to become huge, to so ostentatiously assert selfness in space only to give it back over in bondage? What does it mean to make the physique into a manifesto of autonomy and yet be fucked like something that is owned? Why sculpt your own flesh through pain and persistence and dedication only to cover that same flesh with the tanned hides of a torpid and domesticated animal such as the common cow? I both knew and felt in this moment that these questions answered themselves- that pleasure exists in strange proportion to the sacrifices made on its behalf, that extremities negotiate in occult economies known only to the very few.

Stood next to this leather-bound tower of anointed muscle was a tall, pinkish phantom in elegant, hooded robes which looked hewn from impossibly luxuriant white terry. I knew via the irrational logic of visions and dreams that this caucasoid-flesh-colored specter was a MTF transwoman. She lent a spectacular power to the image- in her hermaphroditic beauty she seemed a 30th century Madonna, a cyber-virgin who has given birth to herself; She whose very visage demonstrates a triumph over the tyranny of fate. She who has forced via her will, her fortitude, and with the techne of surgical intervention, that her very body be reconfigured into conformity with truths more profound than those of chance. She is a goddess whose mere presence indicts the assumption that the ‘real’ is immutable, objective, truly true. She is a liturgy given form- a revelation that the hallucinations of the collective need not hem in the truth nor delimit the boundaries of the real. She is paradox poured into skin; at once revealing the fascism of chance’s doctrine and at the same time a revolutionary refusal to accept the sanctity of its law. She is avatar of Nike, the winged goddess of victory, and Her victory is against the impositions upon self by hateful other; a strike against inhumane chaos. She is in combat with limitation itself; a campaign against the very concept. The gnosis her presence bestowed stands in strange harmony with that of her muscular companion: That bravery is less a virtue than a mandate, that oppression tends to colonize those who are bereft of it– that sometimes truth demands blood.

The Weird Woman’s vision held me in its thrall but was soon unmoored by the complexity of its own characters– it was first freed of form, and then from time and finally these wraiths dissolved fully into the infinite, taking with them my tiny mind.

Having been granted this vision and the troubling rumbles it belched into my brains, I feel also a renewed resonance with the Weird Woman herself and with her beguiling psyche. She makes of herself merely mystery, never to be known. How lonesome it must be for her to remain unknown and unknowable. The eternal stranger, existing only to befuddle her charges and send their minds down the chute. To be seen only on the way down, falling eyes gazing up at her standing on the ledge off of which she has shoved them, her silhouette shrinking ever smaller before disappearing entirely as the spiral tightens inward and at last the mind is bent entirely into itself. But, the Weird Woman is above all weird, Corum, very weird. It is her gift to us, even as it is also her curse.

NOTE: This is a prelude to the forthcoming 'Bay of Pigs II' album.